Call Out the Killers

There are child killers in your community

The walls of our culture overflow with blood. Over 3,000 children are murdered daily in this country, with the government’s approval. Our culture’s obsession with child sacrifice necessitates that someone meet their demand- that someone murder babies for a living. If the demand for anything is strong enough, there will be a supply. The demand for abortion is rampant in our nation, as millions of mothers and fathers seek to cover up sexual sin or evade responsibility by discarding their babies. Prominent physicians, friendly nurses, and courteous clinicians have actually become people who destroy human beings for a living. Chances are that someone in your area aids in the murder of the pre-born for a living.

If you knew who they were, would you call them to repent?

Coming soon, we will expose abortionists and other abortion staff online, and encourage Christians to reach out to them and call them to repent. We will also equip abolitionist societies with the knowledge and resources to expose their local child killers in their communities.

Why are we doing this?

As abolitionists, we seek to respond Biblically to the abhorrent and widespread sin of child sacrifice. We have found that most of our prayers, time, effort, and resources should be directed mostly toward the demand for abortion – the culture at large that desires, supports, or ignores (doctrinally or functionally) abortion. We call the culture to repent of its support for abortion, the Church to repent of her apathy and inaction, the government to repent of its failure to uphold justice, and the parents going into the abortion mills to repent of their murderous actions and intentions towards their children.

Up to this point, there has not been a clear avenue by which abolitionists can, in accordance with the 5 tenets (link), focus on the supply of abortion. This project is designed to fill that void which was evident in the abolitionist movement.

We actually see it is our Christian duty to reach out to those in deep darkness, even those who murder children for a living. God’s Word is clear that these people “ lie in wait for their own blood; they set an ambush for their own lives”, and we must warn them of what awaits them if they do not repent.

Undoubtedly, many people will this project as extremely controversial, yet at the same time insist that abortion is a mere medical procedure, akin to removing a foreign organism. If abortion is not murder, then what we are doing is not controversial. But since abortion is murder, we know that people will perceive what we’re doing as controversial, dangerous, and reckless. For someone who believes abortion is a right, there should be no fear or stigma about us posting abortion providers’ information, since the internet is full of millions of other healthcare professionals and their information.

Despite the edginess of this project, we want to wholeheartedly reiterate our non-violence statement (link), and make clear our intentions for this project. Our intentions are not to encourage harm to anyone, but rather to see people come to repentance. We seek the redemption of abortionists, not their destruction. This project is designed to encourage abolitionists to offer their local child killers forgiveness and new life in Christ.

Have I any pleasure in the death of the wicked, declares the Lord GOD, and not rather that he should turn from his way and live? 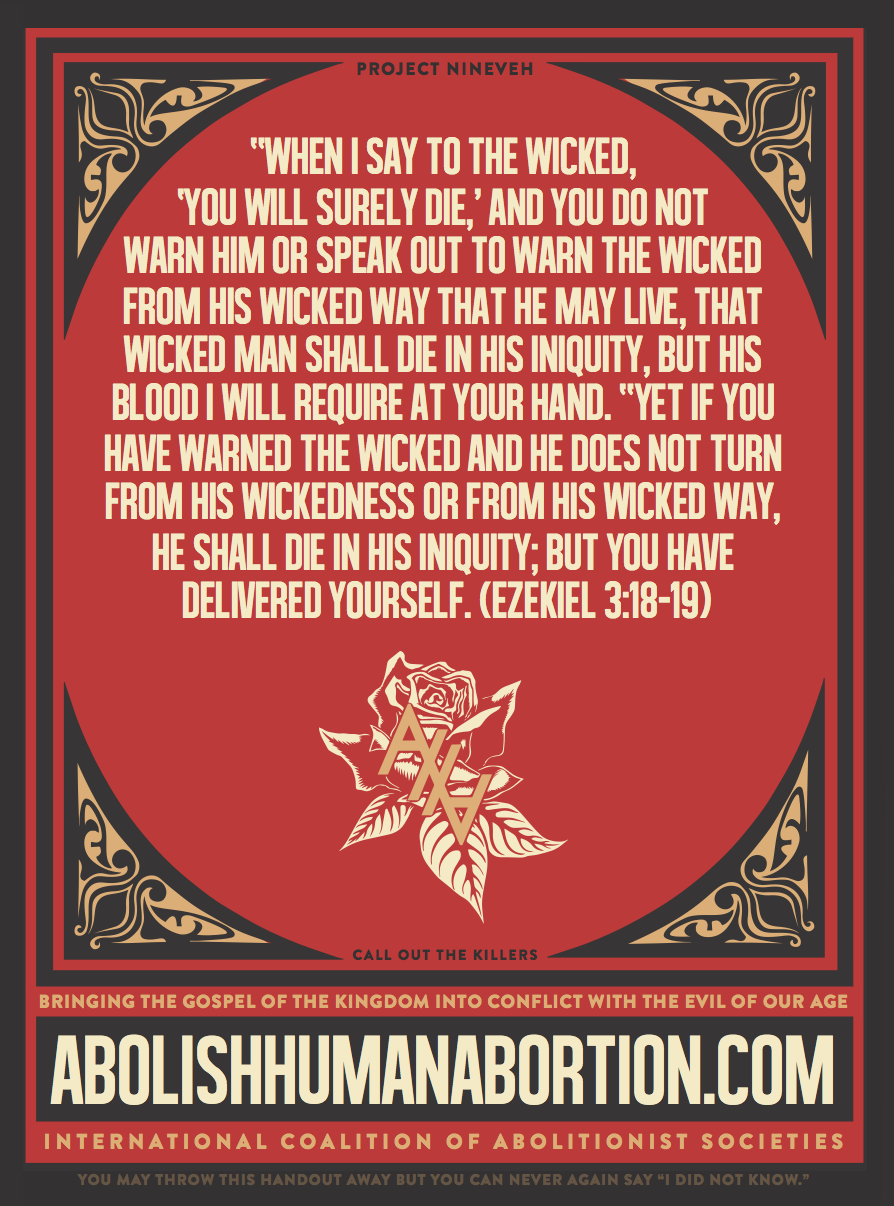