Project Nineveh is a campaign designed to call our nation’s cities to repent. Throughout 2015, abolitionist societies are gathering in different cities every month to exhort and teach one another, and to go out into the cities, highways, and byways calling all to repent of their apathy and participation in child sacrifice.

Project Nineveh exists because The United States of America is an idolatrous nation filled with cities of apathy, indolence, violence, and vice – cities in which wicked, greedy, and sexually immoral men and women sacrifice their own children on an altar of convenience, celebrate their sin as “choice,” and refer to the destruction of their own children as “family planning.”  In America, millions of babies are poisoned, burned, frozen, discarded, ripped to shreds, and forcibly removed from their mothers’ wombs. And all of this is worked out by those who should have loved, protected, and cared for them the most.

Our nation is home to tens of millions of professing followers of Jesus Christ who daily turn a blind eye to the abortion holocaust and treat child sacrifice as though it were merely a voting issue, somebody else’s problem or a “special calling” to be addressed by those rare Christians who “have a heart for it”. Our cities are home to those who either actively participate in the murder of their own relatives, or approve the practice through their inaction, having made peace with the shedding of innocent blood. Due to the increase of wickedness, the love of most in our nation has grown cold,  and its inhabitants love themselves more than they love their neighbors. (Jer 6:13-15; Matt 24:12; Jas 5:1-5; 1 John 3:17-18)

The Lord Jesus gives life and breath to this entire nation, and He desires that it’s people turn from wickedness, the shedding of innocent blood, and all forms of idolatry. Christ desires this nation to be a land where people love, serve, and care for one another. But our nation is overflowing with the blood of the innocent. Your neighbors, whom you were created to love, are being ripped limb from limb in the name of convenience. What can God do with a nation such as this, who remains stubborn in sin? In the past, God sent prophets to warn cities to turn from the violence and bloodshed. Jonah was a prophet sent to Nineveh in order to warn them of the righteous judgment that God would bring upon their city for their sin. Upon arriving in Nineveh, Jonah proclaimed to the city, “yet forty days and Nineveh shall be overthrown.” The people of this great, powerful city had failed to love God and their neighbors, instead committing acts of violence and hate toward one another. The response of the people was not to shout “Oh, everyone is a sinner!” “Who are you to judge us?” “Let him without sin cast the first stone!” No. The people humbled themselves. They owned up to their terrible deeds. They confessed and repented of their sins against each other and against God.

And the people of Nineveh believed God, called for a fast, and put on sackcloth, from the greatest of them to the least of them.’ (Jonah 3:5) The word of the Lord made its way to the king of Nineveh and he likewise admitted his wrongdoing and turned to the Lord in repentance. The people declared, “Let everyone turn from his evil way and from the violence that is in his hands. Who knows? God may turn and relent and turn from his fierce anger, so that we may not perish.” When God saw what they did, how they turned from their evil way, God relented of the disaster that he had said he would do to them, and he did not do it. (Jonah 3:8-10). 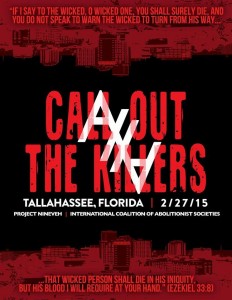 It may not be too late for your city. Now is the time for repentance and faith. Today is the day to stand up and protect the innocent within your city.

If you have had an abortion, repentance is available to you. Hiding your sin, ignoring it, or justifying it will not help you in the present or when you stand before the judgment seat of a holy God. If you have supported someone else’s decision to shed innocent blood, you too must do what seems most difficult and confess your sin. If you have not personally participated in this holocaust, but have been indifferent to the plight of your neighbors and fattened your heart in the day of slaughter, today is the day of repentance. The people of God will rise up and do exploits. Expose the evil taking place in your city, and call your neighbors to repent of apathy, bloodshed, and violence. Perhaps God may not bring judgment upon your city. God can assuredly restore you and your city to great heights of righteousness, but you must come to Him. Find forgiveness through the death and resurrection of Jesus. Know that He is a great King who is establishing justice and mercy throughout the earth, and that you were created to love Him and your neighbor.

We believe that the good news of Christ’s triumph over sin and death and the advancement of His Kingdom on Earth as it is in Heaven holds the answer to abortion. This does not mean that we want to force people to live in a theocratic state or punish unbelieving people who reject God for failing to “be religious.”

No! We are spreading a message of reconciliation between sinful people and a Holy God. Sin puts people in bondage, leading them into suffering and drives them to the point of destroying their own flesh and blood, bringing the wrath of God on the world. God, in His patient grace, is waiting for many to turn from this wicked world and its fleeting pleasures and look to Christ as King.

Mothers, fathers, family members, friends, abortionists, and other abortion clinic workers who have committed, procured, encouraged, or facilitated abortion have committed a grave sin against God in murdering children. They need to be told that abortion is sin, that God hates the hands that shed innocent blood (Prov 6:17) and He will judge murderers and condemn them to Hell for all eternity if they prefer their sin to God’s grace and redefine the evil they have done as good and necessary. Upon their deaths, such will be separated from God and everything that is good and loving (1 Cor 6:9-10; Rev 21:8). However, with this terrible truth comes the good news that Jesus Christ forgives sinners, even murderers (2 Sam 11-12; Ps 51).

Project Nineveh is bringing this message of forgiveness and reconciliation to our nation’s cities. Unlike Jonah, we desire God’s gracious redemption, in place of God’s just wrath. We are proclaiming this message in hope that God can and will show mercy on our nation. Do not let an hour pass, for we do not know when the time of judgment may come. We are not guaranteed another minute. Repent and believe.